Working in the Public Eye 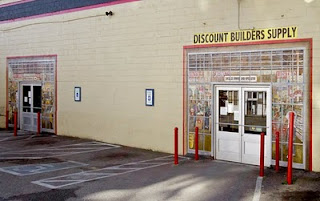 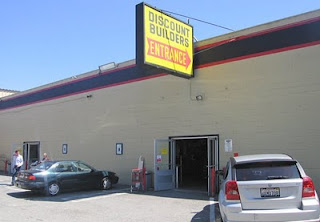 Our commission was to make this storefront look friendly, inviting and interesting. The intention was to enhance the identity of a long-time established hardware business by painting faux windows around their two doorways.
This got us out of our studio and into the beehive that is the parking lot at Discount Builders Supply. It was a good kind of challenge for both of us. Starting early the first morning told us that we needed to come in a little later in order to let the morning rush of vehicles and noise subside. Working in the public is one thing but working in a whirlwind is another.
So we settled into a routine of starting early in the afternoons and going till dark or a little later.
It was September and we were loosing light fast every evening. The store closed at 6 during the week and that's when the doors closed too so we could then move our scaffold and work on the center sections. From 6-8 p.m. we worked hard and tried not to get too cold with the fog rolling in.
This took 18 days on site and was a really good experience to find ways to explain what we were doing in the beginning before people could see the effects of our lines and blocks of washes that eventually added up to windows, panes of glass and interior details. The mural gives depth to the walls that were very unremarkable at the start.
Posted by Jennifer Ewing at 9:04 PM